David Gregory is the founder of and the Conductor Emeritus of the Georgia Wind Symphony. He is former Director of Bands/Coordinator of Music Education at Reinhardt University (Ret.) and Director Emeritus of Tara Winds. He has conducted elementary, junior high, high school, community college, university, and professional bands during his career.

A former director of bands at Hardaway High School in Columbus (GA), Forest Park High School in Forest Park (GA), and the University of Florida in Gainesville, (FL), and former Clayton County (GA) Coordinator of Instrumental Music, Dr. Gregory served as Assistant to the Superintendent in that school system for twelve years until his retirement from public school work. Dr. Gregory is a Past President of the National Band Association and served eight years as Advisor to the Executive Committee of that organization.  At Reinhardt University Dr. Gregory taught undergraduate Music Education classes, music technology, conducting, and orchestration and arranging courses; conducted the Wind Ensemble; supervised student teacher interns; and was coordinator of the Music Education program.  Additionally, he taught graduate classes in conducting, scoring and arranging, literature, and directed international studies. He was the Georgia NAfME Collegiate advisor and coordinator of all state NAfME Collegiate activities for GMEA from 2007 until his retirement in 2014.

Bands under Dr. Gregory’s direction have received invitations to perform at virtually every music conference of regional and national significance, including the National MENC Convention, the American School Band Directors Association National Convention, the Mid- East Instrumental Music Conference, the University of South Carolina Band Clinic and Conductors’ Symposium, the Western International Band Clinic, the Florida State University Tri-State Music Festival, the SEUS Concert Band Festival, Bands of America Invitational Concert Festival, the University of Southern Mississippi Conductors’ Conference (3x), the University of Georgia High School Music Festival (6x), the CBDNA/NBA Southern Division Conference (4x), the University of Alabama High School Band Festival, the Atlanta International Band and Orchestra Conference, the Southern Division MENC Convention, the American Bandmasters Association National Convention (3x), GMEA state conferences (with 4 bands for a total of 14x), and the Midwest Band Clinic (3x). Gregory continues to make numerous appearances as conductor, clinician and presenter at regional and national music conferences as well as all-state and honor band events throughout the United States.  He has presented clinics/workshops at the Midwest Clinic on four occasions and at the GMEA Conference numerous times. Tara Winds was the 1996 recipient of the Sudler “Scroll of Honor,” and his Hardaway High School Band was honored by the John Philip Sousa Foundation as one of the nation’s most outstanding high school programs for the decades 1960-1980.  A highlight of Dr. Gregory’s career is the distinct and singular honor of having his ensembles invited to perform at 45 conventions and conferences of state, regional and national significance.

Personal and professional awards for Dr. Gregory include the MAC Outstanding Bandleader award for the state of Georgia, the Southeastern United States Concert Band Clinic Citation of Excellence, the National Band Association Citation of Excellence fourteen times, the Phi Delta Kappa Excellence in Leadership Education Award, and the Sudler Foundation “Order of Merit.” In 1998 he was inducted into the Phi Beta Mu “Georgia Bandmasters Hall of Fame” and in 2003 received the Phi Beta Mu “Outstanding Bandmaster Award” for the state of Georgia.  In 2011 he was presented with the prestigious GMEA “Distinguished Career Award,” and the same year was awarded the Kappa Kappa Psi “Distinguished Service to Music Medal” for his work with bands and in the field of Music Education. One of his most significant recognitions came in 2013 when he received the Outstanding Faculty Mentor Award for Reinhardt University, one of the highests awards given by the University.

Maintaining a regular schedule of appearances, Dr. Gregory has received invitations to appear throughout the United States and abroad. He has conducted all-state bands in throughout America, and his band activities have taken him across the United States, Canada, Great Britain, and the European continent where he appeared as guest conductor of La Banda dell’Esercito of Rome, Italy (2x), the Associazione Musicale “G. Verdi” Band of Aci S. Antonio, Sicily, the Federazione Bande Siciliane of Santa Maria di Licodia, Sicily, the Lucania Orchestra di Fiati of Matera, Italy, La Banda di Sant’Oreste (Rome), La Banda do Commune Triuggio, and five times with La Banda di Sacrofano in Rome. He has been a member of the John Philip Sousa Foundation “Legion of Honor” and “Sudler Scroll” Selection Committees, and he served eight years as a member of the Board of Directors for the National Band Association, and eight years on the staff of Conn-Selmer Institute.  His past and present professional affiliations include Kappa Kappa Psi, Tau Beta Sigma, Phi Mu Alpha, Phi Beta Mu, the National Band Association, Music Educators National Conference, College Band Directors National Association, World Association for Symphonic Bands and Ensembles, Georgia Music Educators Association, American School Band Directors Association, Phi Delta Kappa, the Florida Bandmasters Association, and Pi Kappa Lambda.  He is an elected member of the prestigious American Bandmasters Association and served as a member of the Board of Directors for that organization. 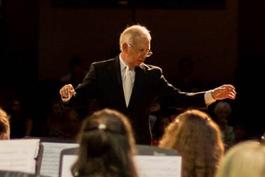